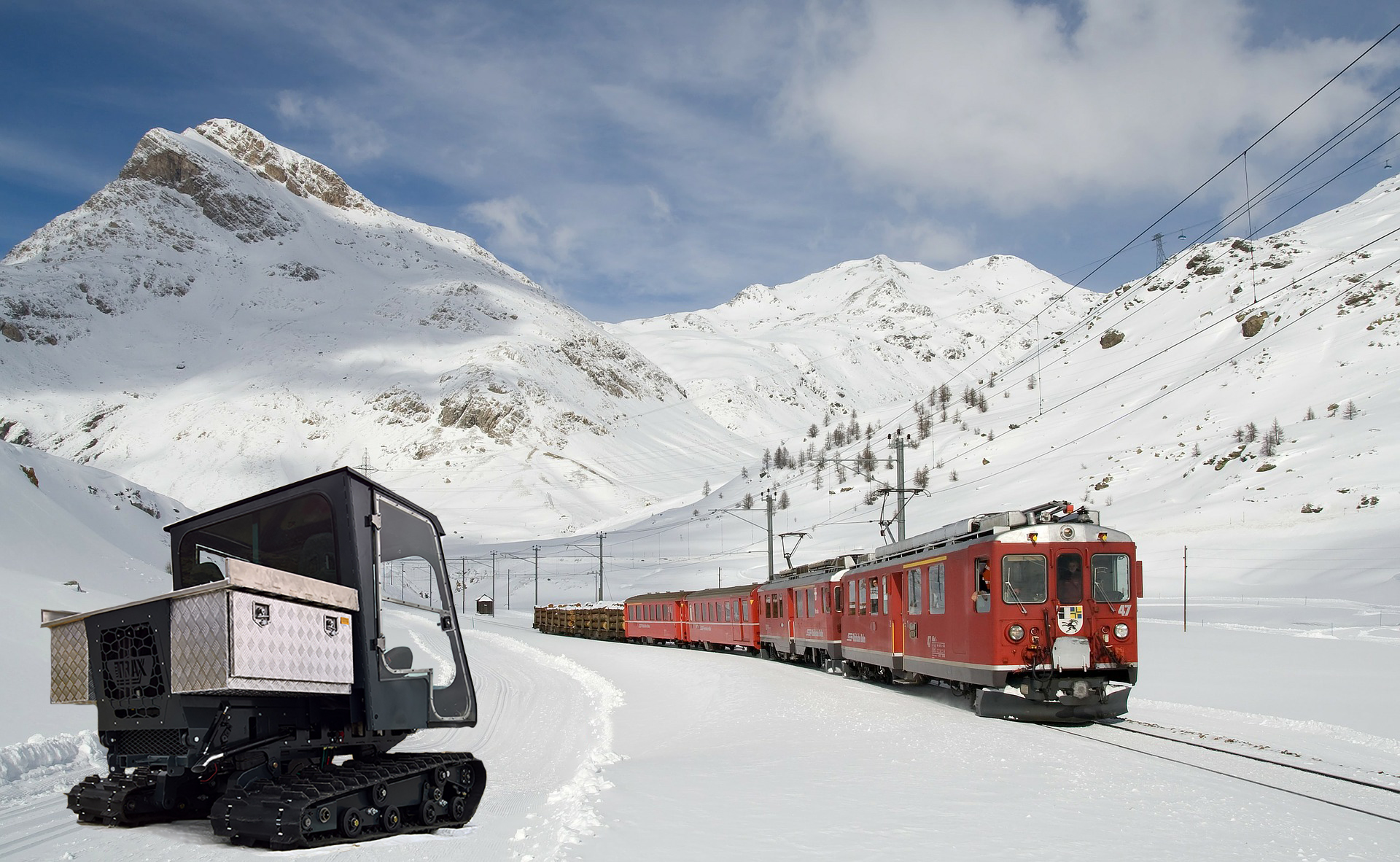 Answering the age old question, what exactly is a “snowcat”?

According to Wikipedia, A snowcat is an enclosed-cab, truck-sized, fully tracked vehicle designed to move on snow.

Snowcats used for snow grooming are also called ‘piste machines’, ‘trail groomers’ (in North American English) or ‘piste bashers’ (in British English) because of their use in preparing ski trails (“pistes“) or snowmobile trails. Most snowcats, such as the ones produced by Bombardier or Aktiv in the past, have two sets of tracks, fitted with a Christie suspension or a Vickers suspension. Others, like the Tucker Sno-Cat and Hägglunds Bandvagn 206 vehicles, have a complex arrangement of four or more tracks.

The tracks are usually made of rubber, aluminum or steel and driven by a single sprocket on each side, and ride over rubber wheels with a solid foam interior. Their design is optimized for a snow surface, or soft grounds such as that of a peat bog. In addition to grooming snow they are used for polar expeditions, logging in marsh areas, leveling sugar beet piles, and seismic studies in the wild.

The cabs are optimized for use in sub-zero weather or cold conditions worsened by wind chill, with strong forced heating and a windshield designed to be kept clear of internal and external ice or condensation through a variety of means such as advanced coatings, external scrapers (windshield wipers of a modified type), and internal ducts blowing hot air on the surface.

The forerunners of the Snowcat were the tracked “motors” designed by Captain Scott and his engineer Reginald Skelton for the Antarctic Terra Nova Expedition of 1910-1913.[1] These tracked motors were built by the Wolseley Tool and Motor Car Company in Birmingham. In the 1955-1958 Fuchs and Hillary Transantarctic Expedition, four modern snocats were used, produced by the Tucker Sno-Cat Corporation of Medford, Oregon. These vehicles were highly modified for the purposes of the expedition.

The name “snowcat” originates from the 1946 trademark by Tucker Sno-Cat Corporation. This specialized over-snow vehicle dominated the snow transportation market until the 1960s when other manufacturers entered the business. By then “snowcat” was such a common description that it was used to describe all over-snow vehicles (see generic trademark). Tucker is also well known for its use of four tracks on its vehicles. Tucker Sno-Cat is arguably the best known of the early manufacturers and remains in business today. Tucker Sno-Cats have been used by numerous military, governmental agencies and utilities.

Another early model was the Swedish made Aktiv Snow Trac of which 2265 were manufactured in Sweden between 1957 and 1981. NATO forces used the Snow Trac successfully during the cold war between NATO and the USSR. Numerous accounts from Antarctica related successful use of the Snow Trac by research organizations such as A.N.A.R.E. in Antarctica.

In 1973, in Breckenridge, Colorado, the term “Snowcat”, derived from the snow grooming equipment of the same name, was coined to describe people who migrate to the mountains for the snow and skiing. It became an alternative to the more used “ski bum”. Much like the term “Snowbird” was coined to describe those who migrate to warmer climates for the winter. It evolved from a project by marketing students at the University of Tampa (Florida) and is generally attributed to Frank Zedar, who became an avid skier in Breckenridge, after leaving school in Tampa, for military service with the US Army at Ft. Carson, Colorado. While teaching him to ski, his friends warned him to “watch out for the snowcats”…, implying that they were a type of mountain lion. This humorous experience gave birth to the term, as used to describe those who flock to the ski resorts near Denver, Colorado, on weekends.

Thiokol sold its ski-lift and snowcat operation in 1978 to John DeLorean, and changed its name to DeLorean Motor Company (DMC). DMC was later bought out by its management team and renamed Logan Machine Company (LMC). LMC ceased production in 2000. Thiokol’s Imp, Super-Imp and Spryte were popular dual-track snowcats and Thiokol’s production continued under DMC and LMC. The Spryte, sold later as 1200 and 1500 series machines, are still popular in commercial and industrial use, nearly 20 years after the end of their production runs. Many of these models are still in use today in the commercial market and are popular as privately owned snowcats.

KRISTI snowcat had a limited production of two-track snowcats between 1956 and 1968 in Colorado; it never became popular and ceased production with fewer than 200 total units produced.

Aktiv Snow Trac ceased assembly in 1982 when its engine supplier (Volkswagen) ceased production of its air-cooled engines in Europe. Over 1000 Snow Tracs were imported to Canada and the USA, mostly by Canadian utilities and U.S. governmental agencies; the Snow Trac is still in common use in private ownership and to a lesser degree in commerce having produced over 2200 total machines which saw popular use all over the globe.

Bombardier still continues in business but has radically altered its business model and product selection and sold its snow grooming division and no longer makes commercial snowcats. Bombardier sold over 3000 of its popular snow bus models which are still in use today and in popular demand by dedicated collectors; thousands of other Bombardier models were also produced as ski-slope and snowmobile trail groomers with the Bombi and BR100 to 180 series machines as notable units produced in high quantities. Bombardier Recreational Products still produces the SkiDoo line of open ridge single-tracked personal snowmobiles.

When you’re ready to get inside your own personal snowcat and out of the cold let us know!